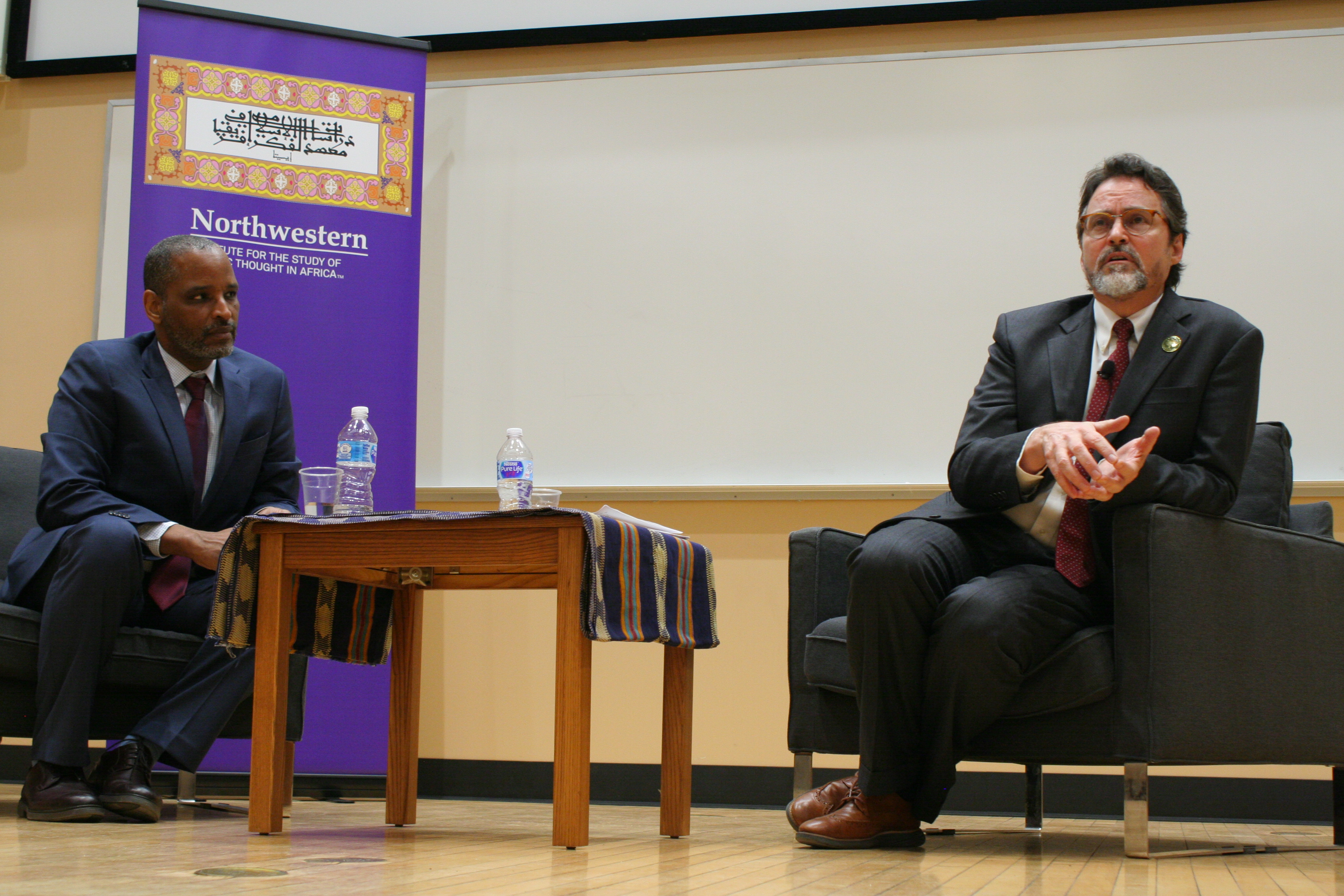 Speaking at Northwestern in January, scholar Shaykh Hamza Yusuf paid affectionate tribute to Mauritania’s institutions of Islamic learning—the nomadic schools known as mahadir (singular mahadra). Flourishing in the Sahara since the 1600s, these “college caravans” have cultivated a rich Islamic scholastic tradition, of which Yusuf himself is a product. ISITA's invitation to speak at Northwestern, Yusuf said, was a welcome opportunity to formulate his thoughts about a tradition with which he has been engaged for thirty-five years, and that has profoundly shaped his formation as a Muslim, a scholar, and a human being.

One of the Western world’s most influential Islamic scholars, Yusuf is cofounder and president of Zaytuna College in Berkeley, California—the first accredited Muslim liberal arts college in the US. In addition to his scholarly publications, Yusuf has a robust online following for his recorded sermons and talks. In introducing him, Zekeria Ahmed Salem, director of the Institute for the Study of Islamic Thought in Africa, noted that the visit supported ISITA’s mission of engaging Muslim scholars and religious figures as interlocutors, not simply as informants.

Yusuf began his talk by setting a historical context for the emergence of the Mauritanian scholastic tradition, highlighting the significance of debates about Islamic knowledge and authority in the Saharan region’s history. The Almoravid empire, for example, which covered northwest Africa and Muslim Spain in the 11th and 12th centuries, originated from a movement led by Maliki scholar Abd Allah ibn Yasin to bring religious teaching to the Sanhaja Berbers. In the 1600s Berber religious leader Nasir al-Din sought to establish a state based on Islamic law, leading to protracted armed conflict with the Arab groups and, ultimately, to generalization of a division between warriors and Islamic scholars that has profoundly shaped Mauritanian society and politics.

Yusuf recounted his own experiences as a mahadra student in Mauritania. Traveling in the 1980s, he was told by a scholar in Timbuktu that Mauritania was the last remaining place where one could find “real” Islamic knowledge. That advice stuck with him; later, while studying in the United Arab Emirates, he met a Mauritanian mufti in a bookstore, initiating connections that eventually led Yusuf to study with Shaykh Murabit al-Hajj at a famous mahadra in Mauritania’s Tagent region. Yusuf described living in tents made from tree branches and rice sacks, moving with the larger pastoralist group as the seasons dictated, completing lessons on a wooden board, and learning astronomy under the stunning Saharan skies from a teacher who could tell the time from the position of the stars.

Among the elements of mahadra pedagogy that Yusuf most appreciated were the use of poetry and memorization as pedagogical tools and the emphasis on grammar and word meanings--practices that modern Western education no longer take seriously, he argued. “Law and grammar are profoundly associated,” he said. “Because Mauritania is a law-based tradition, they focus immensely on grammar and word meanings. This is lost on most modern people because we don't distinguish anymore between words. [In Mauritania] there is an obsession with the rigor of definition.  Mauritanians read dictionaries for enjoyment.”

Yusuf described his teacher Shaykh Murabit al-Hajj, who died in 2018 at age 112, as an extraordinary scholar and person who was never heard to speak ill of others. Erudition and humility, said Yusuf, characterize many Mauritanians who pass through the mahadra system.

“The product of the mahadra tradition is a human being,” said Yusuf. “It’s not the knowledge that is so much the focus, but it’s actually the transformative power of the knowledge. You don’t study to earn a living; you study
to learn how to live.”

By Rebecca Shereikis. A version of this article also appeared in Program of African Studies News and Events, Spring 2020, Volume 30, No. 3.